we've got it all wrong 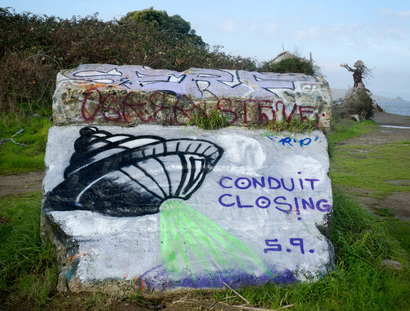 Photograph taken by Larry Jones
Whether or not you believe that UFOs are from another planet or manufactured here on earth, arguing about whether or not they are ‘real’ is an exercise in futility.

Millions of credible witnesses have seen crafts which defy our current understanding of physics.

The common perception is that these crafts must be ‘alien’ in nature because we earthlings don’t possess the intellect to harness such technology.

A closer look at the phenomenon paints a much different picture.  From Nikola Tesla’s free-energy project - Wardenclyffe Tower – which was de-funded, torn down, and sold for scrap before it was operational, to recent breakthroughs in quantum physics, ‘zero-point’ energy applications have been understood for years.

In a 2005 interview with GQ magazine, Jimmy Carter, former US President, describes his UFO sighting, and makes it clear that he does not believe the are being driven by aliens from outer space:

“I saw an unidentified flying object. I've never believed that it came from Mars. I know enough physics to know that you can't have vehicles that are tangible in nature flying from Mars, looking around, and then flying back. But I saw an object one night when I was preparing to give a speech to a Lions Club…  All of a sudden, one of the men looked up and said, "Look, over in the west!" And there was a bright light in the sky. We all saw it. And then the light, it got closer and closer to us. And then it stopped, I don't know how far away, but it stopped beyond the pine trees. And all of a sudden it changed color to blue, and then it changed to red, then back to white. And we were trying to figure out what in the world it could be, and then it receded into the distance. I had a tape recorder—because as I met with members of Lions Clubs, I would dictate their names on the tapes so I could remember them—and I dictated my observations. And when I got home, I wrote them down. So that's an accurate description of what I saw. It was a flying object that was unidentified. But I have never thought that it was from outer space.”

President Carter further reaffirms his belief that UFOs are not from outer space:

“As far as covering up possible flights from distant satellites or distant heavenly bodies, I don't believe in that, and there's no evidence that it was ever covered up. Or extraterrestrial people coming to earth, I don't think that's ever happened.”

The technology ‘exists.’   Are we to believe that it has simply been abandoned, or should we also examine the possibility that the research and application of ‘zero-point’ technology retains ‘top-secret’ government classification?

There are certainly legitimate concerns with making ‘zero-point’ energy available to everyone.  Worst case scenario, humanity is wiped out immediately.  Beyond powering UFOs and allowing free energy for the world, ‘zero-point’ weaponry “would make the hydrogen bomb look like a firecracker” (Dr. Joseph Farrell).

While millions of people have witnessed UFOs, many have also experienced ‘alien abductions.’  These abductions often involve being taken aboard a ‘spacecraft,’ and having implants lodged into their bodies – often their brains.

Implants have been extracted and studied, and are described as ‘nano-technological’ in nature.

Another disturbing aspect of the abduction phenomenon is the ‘breeding’ program which many abductees describe.

Dr. David Jacobs, retired Associate Professor of History at Temple University, has been studying the phenomena and interviewing abductees since 1973.

In his 2015 book, ‘Walking Among Us: The Alien Plan to Control Humanity’, Dr. Jacobs summarizes his findings:

“The evidence I have found points in one direction, and that is the integration of hubrids (Stith: human/alien mixtures) into human society for an eventual takeover.  I have found no evidence to refute this.”

When trying to understand how such an insane conclusion can be drawn, we first have to study our own history.

From the ancient Greeks to the Nazi dream of an Aryan race, and everywhere in between, eugenics has been a popular theme among the ruling classes.

Eugenics (from Oxfordictionaries.com): the science of improving a human population by controlled breeding to increase the occurrence of desirable heritable characteristics.

Throughout the ages, rulers have dreamed of living forever and becoming Godlike, while turning the rest of humanity into a slave race designed to serve them.

Did eugenics simply lose its appeal, or is the plan already in full-swing, with humanity in the process of being bred out of existence?

I truly hope that I’m off base on this one, but fear that I’m not…